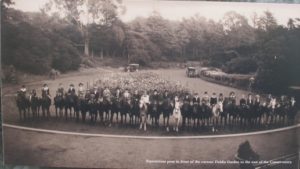 Dahlias have had a dedicated plot near the Conservatory of Flowers since the mid 1920’s.

In the 1980’s, Roy Takeuchi cultivated dahlias in both the oval and on the hillside.  While Roy’s father hybridized all kinds of vegetables Roy developed dahlias and sold them commercially.

When Roy became ill in the early 1990’s, Erik Gaensler began planting the Dell.    Deborah Dietz joined him the next year on the hillside. Erik and Gerda Juul joined 2 years later and were followed the next year by Lou Paradise.  Pat Hunter took over from the Juul’s in 2012. Now Tinnee Lee, Sue Glazer and Nicholas Gaensler grow on the Hillside and Pat Hunter, Lou Paradise and Deborah Dietz grow down in the teardrop.

With the advent of the Internet, international dahlia news has spurred widespread exchange of tubers.  The Dell has hosted originations from South Africa, New Zealand, Australia, England, Holland, Austria, Japan as well as some species of Dahlias from Mexico. Moreover the Juuls and Lou Paradise are highly reputed hybridizers themselves.

Beginning in the 2004 season, we installed an irrigation system in part of the Dell. The system not only saves labor and time, but also is a water conservation device.  The overseers of each area donate all of the tubers.  Volunteers help plant, disbud, de-leaf, pinch out, debug, water, deadhead, and dig out approximately 500 clumps of dahlias.