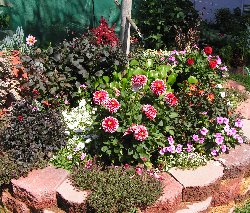 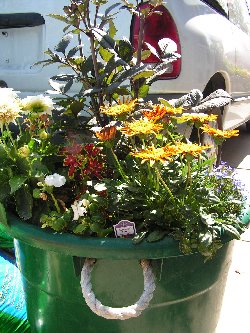 PAPP’S BLUE RIBBON TOUR:  The president of the South Coast Dahlia Society, Bob Papp arranged a grand tour of Northern LA. Four private gardens, two commercial businesses and an institution.  Orlando and I had no problem guessing in which house on the block Bob lived.  Dahlias, gerbera, daisies, veggies, foxgloves, and bergmansias all thrive in raised beds of concrete board, every inch maximized for growing something interesting. Trees twined with fascinating vines and hanging baskets of begonias create a veritable paradise in his back yard.  Bob uses shorter dahlias around his pond and taller show dahlias inside raised beds surrounded with sun-tolerant coleuses, columbines, and bleeding hearts.  He stuffs the bottom of large containers with empty plastic water bottles so he doesn’t utilize so much soil when he perches a tall dahlia and surrounds it with colorful smaller things, using the Steve Notarski principles of Thriller, Filler and spiller. 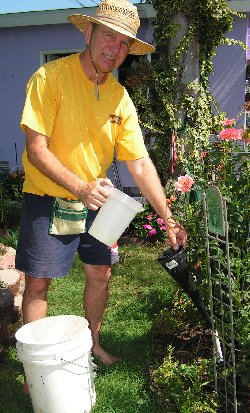 A practical man, Bob has developed cool solutions to common problems.  He couldn’t be bothered employing a turkey baster to distribute his Bayers All in One, so he takes a long necked oil funnel and pours his soil drench into it with out having to bend so much.  When he needs a greenhouse for the cuttings he takes when he tops his new plants, he uses 2 plastic cake containers to make a cutting solarium which he puts in his garage under shop lights.  Because the sun gets fairly intense in Long Beach, Bob has devised sun sleeves cut off from an old shirt with elastic around the upper arms. 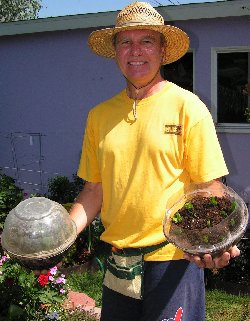 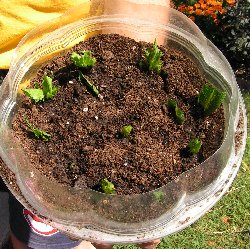 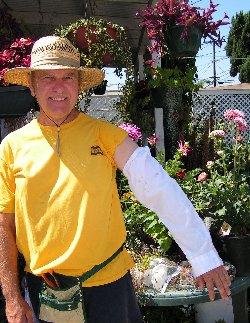 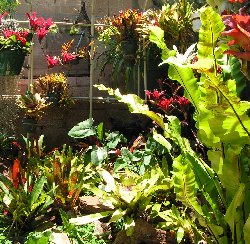 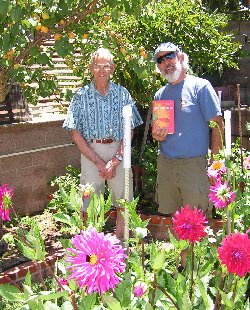 VA HOSPITAL:Bob volunteers at the Long Beach VA Hospital where extensive gardens provide for horticultural therapy.  A big Spartacus entertains hospital workers and patients outside the cafeteria where Bob has planted a large raised round garden.  He also grows several rows of seedlings which he allows the vets to cut.  Of course when we visited, his best patch of blooming dahlias were the ones he’d thrown on the compost heap; they shot up six feet with hundreds of blooms. 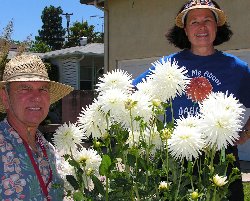 POSTAGE STAMP PARADISE:  Patty and Ed Weimer’s front yard in Torrance combines great dahlias with spectacular roses.  Already in full bloom, Kenora Juibliees  belie Ed’s mere two year’s growing dahlias.  Ed has terraced his back yard for lemon, grapefruit and apricot trees.  Tomatoes burst from their cages and cascade down the embankment.  Under a master engineered canopy unfolds a jungle of bromeliads, tillandsias, and neoregelias, enjoying a wonderful mist system: a perfect cloud forest.  Looking like long, feathery horse tails, 7 swaths of living Spanish Moss cascade.  In 98 degree weather, the mist soothed us all as we munched on succulent apricots. 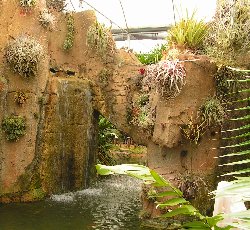 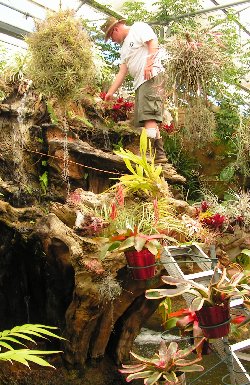 RAINFOREST FLORAL NURSERY is on 19121 Hawthorne Blvd.Torrance, CA 90503.  Because we raved so about Ed’s incredible jungle world, Bob suggested we meet up with Dick Miller at the RainForest Nursery.  Wow!  Orlando said, “This is so well staged, they could charge admission.  All they need are a few butterflies, parrots, snakes, cannibals……..” Truly, the Rainforest transported us out of LA and into a fantasy of cliffs bedizened with succulents and bromeliads, waterfalls, ferns, and strange efflorescences sticking out like tongues from prehistoric looking plants. 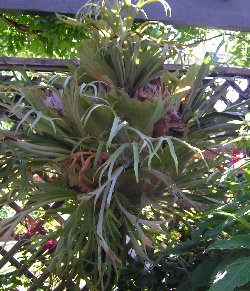 AVOCADO AUBERGE:  Near Ventura, Vicki and Dave’s dahlias luxuriate in raised beds, nourished with an elaborate soaker hose system under wings of shade cloth.  Vicki says that she saw some dahlias at the Del Mar Fair so she attended a meeting.  Starting with 3 dahlias, Vicki’s garden metastasized to over 300, meticulously groomed and presented. No wonder they win so many prizes.  Her sister gave her a staghorn fern which thrived on pagan offerings of banana peels now and then. As it grew, she would hack off a piece and start another eventually resulting in a huge shade room where scores of monstrous staghorns look like they’re trying to escape through the lattice.  Their Dahlia Spa overlooks a path through magnificent roses down onto 2 ½ acres of avocado trees.  Dave explained how even as you pick one crop, the avocado trees are already growing the next one. 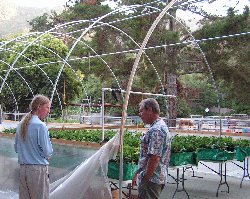 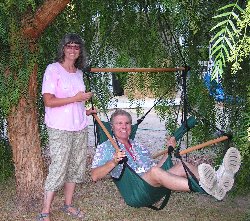 LOVEHOUSEDAHLIAS.COM:  Tucked into the hills along the river, Anne and Andy Dunstan are embarking in a grand adventure combining horse boarding, dahlia propagation and chair caning.  The horses produce fine manure for voluptuous veggies and fruit trees.  In the process of converting an old tennis court into a greenhouse, Andy fights the wind trying to secure a cover over hundreds of 3 gallon dahlia plants. 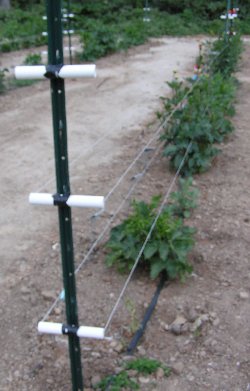 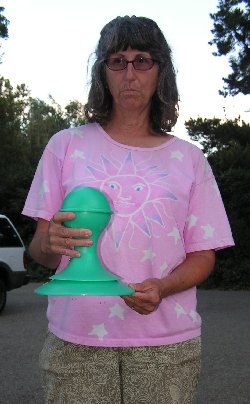 The old horse ring now houses 1000+ dahlias secured with a unique support system instead of individually staking each plant.  Totally organic, Anne showed me a green trolley car that actually lures slugs and snails in but doesn’t allow them to leave.  What I thought were random big plastic chess pawns, turned out to be containers of boric acid and molasses which attract ants and earwigs who then get covered with the solution and go home to infect their nasty friends.  To keep a bunch of potted dahlias hydrated, they used children’s wading pools as BIG saucers.

Bob certainly knows how to pack a day with gardening treats!