NEXT MEETING: March 8 at 7:30 at 9th and Lincoln. Program: Theresa Lyngso, of the Lyngso Company, will elaborate on soil preparation and rumor has it there might be early cuttings/tubers/ milkcartons for sale. Oh, it’s that time again. Who will bring treats to share? 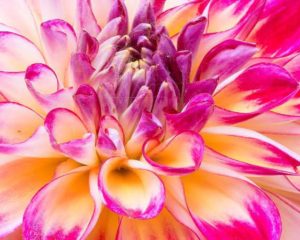 Dr. Larry Way walked us through the basics of better dahlia photography. At minimum he recommends a tripod for stabilization, a reflector for filling in harsh shadows, a loupe to more easily see the screen, a large velvet cloth to serve as backdrop and gardener’s knee pads, so you can get down to the flower’s level. He recommends “taking a thousand photos and throw a lot away.” Early morning is the best time to shoot in San Francisco because the breezes pick up around 9 am. The light is “softer and more lovable” then, too. Larry prefers a shutter release cable. His handouts will guide us this summer capturing our favorite blooms. You can get some advice from Dr. Way at these links How To Photograph Dahlias and Camera Settings

Thank you again to Ron and Joann for the huge BOX of Meyer lemons; they are so heady, they make your hands smell great just by touching them. John Dale donated succulents for a good home.

Congratulations to Patrice and Warren for getting their membership money and form in early; they win $15 to blow at our Tuber Sale. Amy Yabut gets to dream of what she will buy with her $20 voucher. The Grand Winner, Gerda Juul, wins $25 worth of choices. Thank you, Devorah, for masterfully managing not only this fun raffle, but also all our membership duties. We are so very appreciative.

This year’s wild event unfolds the third Saturday, April 16, from 9-noon. We need your help setting up for this feeding frenzy. Get on the volunteer list by emailing dahlia.dietz@gmail.com or calling her 415- 816-2118. Volunteers will need to be at the Hall of Flowers before 8 am to help put plants and tubers in their proper spots, label things, match photos to varieties, help count up purchases, and most of all help our customers make the best selections for their purposes. We will sell cuttings, named tubers, tubers in milk cartons already sprouted, and mystery tubers with no names. This is our major fund- raiser for the year, so please help make it productive. Let all your friends know about this great opportunity to get pedigreed, competition-level dahlias at astoundingly low prices. 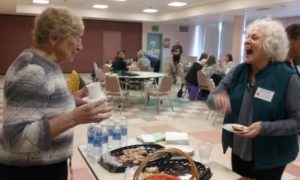 What a success! DSC hosted 10 from San Leandro, 11 from DSC, 6 from Monterey and a single Ken Masurat from San Jose. Two unaffiliated dahlia growers came to learn more about us, too. Alas, no one from Southern California attended. DJ’s in absentia culture report revved a discussion about growing dahlias from seed. Kristine emphasized how little space a few 4×4” pots take and how much fun rolling the genetic dice for new varieties is. After graciously acknowledging renewed acclamation for receiving the highest honor bestowed by the American Dahlia Society, the ADS Gold Medal, Lou Paradise announced that a new Composite Classification Book 1976-2016 is now available through the ADS website for $12 plus shipping. 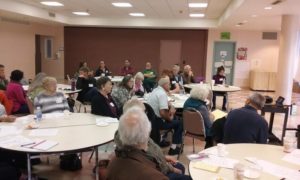 We ooohed over the conference medals given out to Bill Bagley for Best AA, Nick Sr.; to Lou Paradise for Best B, AC Abby and the Juul Award for best seed- ling; and to Deborah Dietz for Best Vernon Rose. 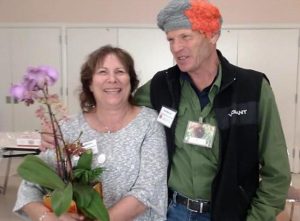 Discussion ensued as to whether we should hold a PSW Conference every year, every other year, whether it should be one day or two, and how many dahlia societies are capable of putting on such an occasion. California used to host 9 dahlia societies; now there are titularly 6 but two of those are wilting.

Six or seven years ago Kevin Larkin noted an increase in spotted snake millipede sightings. Last year they wiped out 80% of Lou and Devorah’s tuber crop. In the past, these 1⁄2-1 1⁄2” segmented worms ate organic matter and debris so they were not a problem. However, something changed. These little greyish/redish crunchy pests eat the skin near the dahlia crown, thereby invalidating the eyes and in- creasing the rate of rot for the whole clump. 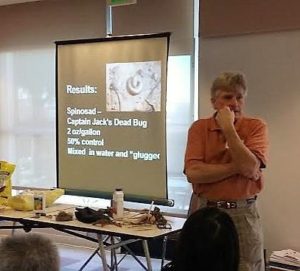 Kevin sought out his fellow professional pest management collegues. They are beginning to be concerned now that the nefarious SSM has begun affecting the potato crop. Kevin tried a few experiments. He laid out sliced potatoes and carrots to see how the SSM might respond. No reaction. The little cruds ignored his offerings. However, he inadvertently learned that SSM hold raves in cat feces—a perfect damp– but not wet– richly organic environment. Positing that SSM lay eggs in the soil, Kevin bets that frequent tillage might disrupt their parties.  Going without mulch might remove sanctuaries for them.  Ideally, everyone could have free-range chickens scratching at the base of each dahlia. Kevin rounded up a squirming mess of SSM and plopped them into various petri dishes. He tried diatomaceous earth. The SSM all moved as far as possible from the stuff so he concluded that diatomaceous earth was 100% effective. We might want to add some to our vermiculite for storage purposes or put it over stored clumps; the downside is that it mushes with dampness. Next, Kevin applied some Spinosad—Captain Jack’s Dead Bug—which is a stomach poisen to one of his writh- ing petri dishes. After a few days 50% of the SSM appeared vanquished. Next he dropped pyrethrin, a chrysanthemum extract which destructs nerve systems and noted another 50% result. He wonders if you combined both spinosad and pyrethrin and used them as a drench when you plant???? Kevin considered Rootshield or Chlorox baths for tubers. Finally Kevin suggested mustard seed biofumigation. A company in Watsonville grinds up mustard seed and sells a pelleted mix, $29 for 10 pounds called Pescadero Gold. It seems to repel SSM. Ida Gold is a mustard seed which is need 60-70 days to full bloom. One tills it under about 3 weeks before planting. All of this information, Kevin warns, is “not peer reviewed research.”

Normally our raffles are divided up into $1 items and red ticket mega items. This year all the possibilities were outstanding. Colleen donated four magnificent orchids. Devorah hand made three hats and a trivet with dahlia adorning them. Marcia brought a pot of narcissi. Kevin and Karen donated a $75 dollar gift certificate from Corralitos; Jamie contributed a $50 gift certificate from Aztec. Roland Varrone, Calvin Cook, and Les and Viv Connell each sent in $25 gift certificates from Pride of the Prairie, Arrowhead, and Les and Viv Dahlias. Kristine, Devorah and Kevin all tantalized us with gorgeous cuttings for instant gratification. Marilyn Warden and Becky both donated lovely vases. Babette Villansenor proferred a lovely dahlia calendar available at dahlianista@gmail.com. Our glowing allurement and first off the table was Lynda Paradise’s hand-made quilt with a dahlia design. Wow.

Thank you to everyone for your generosity: those who contributed and those who bought bunches of raffle tickets. 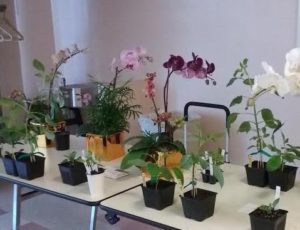 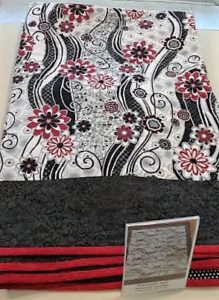 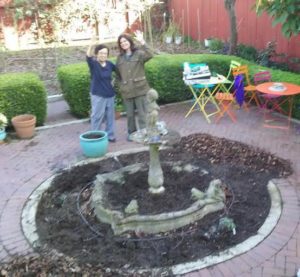 The Wardens again donated all their tuber clumps
– the catch? Sarah, Rose and I had to dig them up and cart them away. Sarah and John practiced their dremmel dividing skills, whilst Rose screened dirt into wonderful potting soil. Some have already sprouted in my germination loft and will be available for sale at our March meeting. 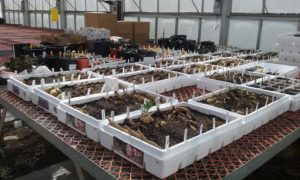 Well, at least hundreds. Lou, Devi and Pat have set up digs in the big greenhouse where they cdultivate the luscious cuttings we buy buy buy at our tuber sale. Please tell them how much you appreciate the many hours of precise functions they perform for DSC.

Karen Zydner spread sheeted all the winners from all the shows in our conference and pub- lished four views of our 2016 winners: By Size and Type; Courts of Honor; Top Twenty list; and Hall of Fame Winners and Candidates. The 5 most successful dahlias last year were: Park- land Rave, AC Abbey, Jomanda, Kenora Jubilee and Pam Howden. Check out Karen’s lists here.

And still more dazzle for you garden wishlist 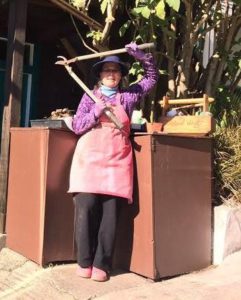 Check your tubers. Are they solid, not soft and rotting???? Bring them out of their cool slumber and into a warm area so they will sprout up for our tuber sale. I have hundreds of milk cartons sprouting in the loft. DO NOT WATER UNTIL YOU SEE GREEN sprouted. I am still pulling clumps up in the Dell, dividing and potting them
up at home. My 5 year old neighbor, lured by the dremmel buzz, politely returned back to the Maus Haus with wee blue garden- ing gloves asking if he could help. Amazingly, at only 5, Enio labeled cartons, filled them with soil, and schlepped them to the upstairs balcony. His mama nabbed him far before his curiosity waned. Never too young.

Thanks to James’ tinkering, my greenhouse lights all glow in the middle of the night. I am so grateful to him for volunteering to make things work. I have begun taking cuttings from tubers with multiple sprouts and topping leggy shoots over 12.” You may see some at our March meeting cognoscenti sale. You still have time to put lots of compost and chicken manure in your dahlia patch. Dahlias thrive in complex but well drained soil.