Q: Dahlias were originally native to Mexico. Do you know the romantic history of how it became such a popular plant in the 1800 when some 10,000 new varieties of dahlias were introduced and ranked right up there in popularity with roses?

A: In 1570 King Phillip II of Spain sent Francisco Hernandez to Mexico to study the natural resources of the country. He stayed for 7 years and described plants that resemble dahlia species under the names, Acocotli and Cocoxochitl. The first drawings were made of the dahlias by an associate who was traveling with Hernandez and were published in 1651.

They disappeared from record until 1787 when a botanical expedition sent seeds back to their headquarters in Europe. Their existence was kept secret for another ten years.  The history of their introduction is confusing. Spanish invaders sent them home to the Old World, but dahlias did not take European gardeners by storm. In the early 19th century seeds were sent to Berlin, where they were named after Dahl. When they returned to the New World, they were known as ~Mexican Georginas.~ The first dahlias to make their way from Mexico were in Empress Josephine’s garden at Malmaison. Josephine was very protective of her dahlia collection. During that time, a good dahlia could be traded for a diamond. Fearing the rare tubers might fall into someone else’s hands, she alone cared for the plants. When one of her loyal ladies-in-waiting hatched a plot to get a tuber, Josephine banished her and ordered the dahlias to be destroyed. 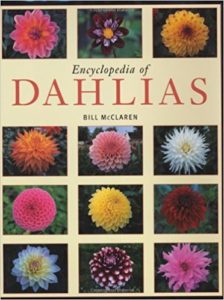 Because a disease in the early 1840’s had destroyed the French potato crop, the scientists at that time looked at the dahlia as a possible source of food.  However after tasting the dahlia they gave up the idea and decided just to grow it for its beauty. There is story from the eighteenth century concerning love and dahlias. Sir Godfrey Webster was living in Florence with his wife when Lord Holland came to town. Lady Webster eloped with Lord Holland . The love affair between the two blossomed into a long and happy marriage. From 1800 and 1805 they lived in France and in Spain where Lady Holland first saw dahlias that had reached Spain about 15 years before. She sent some home to England and it is on the strength of that shipment that she is given credit for the introduction of the dahlia into England.

A very good reading source for the history and other aspects of Dahlia is the Encyclopedia of Dahlias by Bill McClaren.